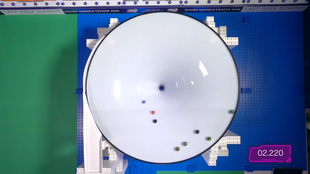 In the Black Hole Funnel, 4 teams send out 2 marbles each into 2 heats. They are then released into a large funnel and have to stay in the longest. Then, the total of the 2 marbles added together. Then, the second run time is added together with the first run time and the team with the slowest time wins the event. 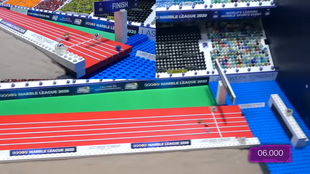 In the 5 Meter Sprint one marble from each team roll down a sloped 5 meter long track as quickly as they can. The first two marbles to cross the finish line advance to the next round. 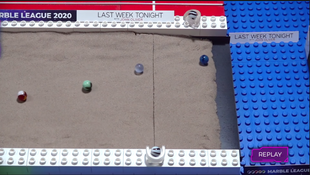 In the Sand Mogul Race, four marbles from different teams race down a 5 meter slope made of sand. The fastest two marbles across the line move on to the next round. 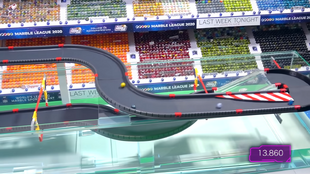 In the Triathlon, the teams race down a course existing out of three sections: a sand rally section, a section on gray "racing track" (made of the same track used in Marbula One), and an underwater section. Each heat contains four teams. The best two teams from each heat advance to the semi-finals and the best two of each semi-final go to the final. 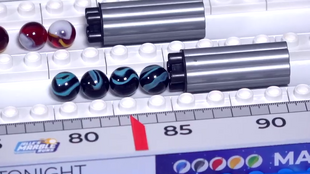 In Block Pushing, two teams roll down a track into a block and push it as far as they can. The teams will then push again in the opposite lane and their highest of their two results will be their score for the event. The team with the highest score wins the gold medal. 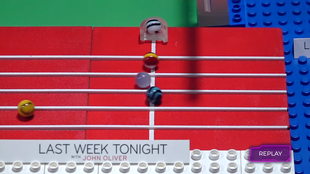 In Hurdles, instead of having the marbles jump into the air over the hurdles, the marbles power their way through hanging flaps. Four marbles from different teams roll down a 5 meter long track, rolling through the hurdles. The fastest two from each heat move onto the next round. 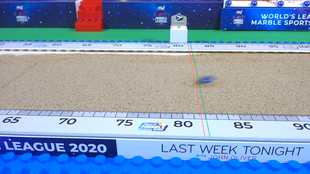 In the Long Jump event, marbles start from the top of a long ramp that allows them to build up speed for their jump before jumping into a sand pit. The further the marble jumps, the higher in the rankings they finish. 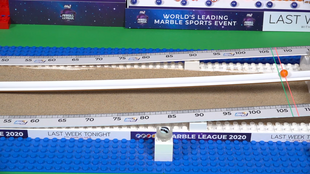 In Newton's Cradle the athlete pairs compete to roll as far as possible after being launched out of the cradle. The first marble (striker) of the teams accelerates from the starting ramp and sends an impulse into the cradle to launch the second marble (skipper) as far up the slope they can. The team whose skipper travels the furthest up the ramp wins. Distance is calculated by taking the measurement at the center of the skipper at the apex of its movement. 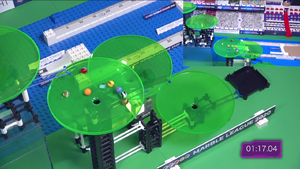 Features ten funnels, with the top five being smaller, orange funnels, and the bottom five being larger, green funnels. The last marble to finish wins. The event begins with 2 heats of 8 marbles each; the slowest half of the marbles in each heat advance to the final round. 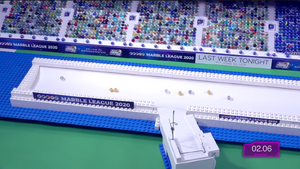 The Halfpipe features a whole marble team rolling down a halfpipe. All four marbles from two teams roll down a chute onto the halfpipe and try to stay rolling for as long as possible while slowly making their way towards the bottom of the halfpipe. The time for the slowest three marbles across the line are added together to give the team their score. The results from each group are combined and the slowest team across the finish line wins. If there is a tie, the team's slowest marble's time will be used to break the tie. Each team has two attempts and the total of both runs is their final result. 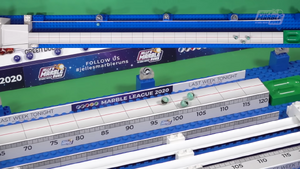 In balancing, teams of four marbles must roll down a track with no walls on it, referred to as a balance beam. If a marble falls off the track, its distance from the start (in centimeters) will be tallied and counted towards the team's final score. Any marble who reaches the green zone at the end of the track earns the maximum individual score of 130, which is also added toward the team's final score. A marble must land in the green zone to score 130; any marble that reaches the end of the beam but does not land in the green zone will only score 120. The team with the highest collective score wins.